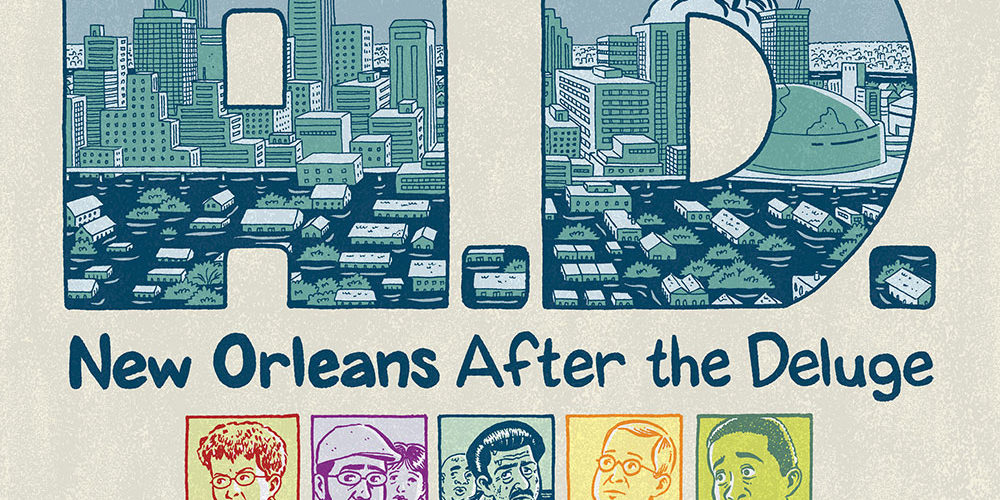 A.D.: New Orleans After the Deluge is a nonfiction graphic novel about a cross-section of seven New Orleans residents and their experiences during and after Hurricane Katrina. Starting with their lives before the storm, the book traces how they deal with the hurricane when it hits, and what happens to them afterward, from losing all their possessions, to facing the flooding, to being trapped in the Convention Center, to evacuating and not being able to return home — all told in comics form. Along the way, A.D. reminds the reader of the vitality and spirit of New Orleans and the Gulf Coast.

A.D. started as a webcomic on SMITH Magazine. Released by Pantheon Graphic Novels in an expanded hardcover edition in 2009, A.D. came out in paperback in August 2010.

A.D. was a New York Times bestseller, was nominated for the Eisner and Harvey Awards, and was selected for inclusion in The Best American Comics 2010, edited by Neil Gaiman. It was a YALSA Great Graphic Novels for Teens selection. In addition, the book was listed on a number of 2009 holiday gift guides, including the New York Times. Vanity Fair magazine declared A.D. to be one of its five “better-than-a-sweater” gift suggestions. And MTV’s “Splash Page” blog called A.D. the best nonfiction comic of 2009.

A.D. has been translated into French and Dutch.

A.D. has been used for high school and college courses, and comes with a free teacher’s guide. I have also presented A.D. as part of a number of university “Common Read” programs. A professor recently wrote,

“The students, most of them first-years, dug so many of the decisions you made. For instance, having an introductory page about Katrina and the brief intros to the characters before the story begins — that helped them get hooked by the story. As did effacing your role until the ‘Diaspora’ section. I also went around the room asking about favorite characters and got almost the full range . . .”

“[A.D. is] one of the best-ever examples of comics reportage, and one of the clearest portraits of post-Katrina New Orleans yet published. An essential addition to the ongoing conversation about what Katrina means, and what New Orleans means.”

“[A.D.] is the people’s history of Katrina…. [It] is a work … of literature, of high art, and of reverence for nature and humanity.”

“A.D.’s … stunning panels … retell the harrowing experience of what it was like to live through the disaster.”