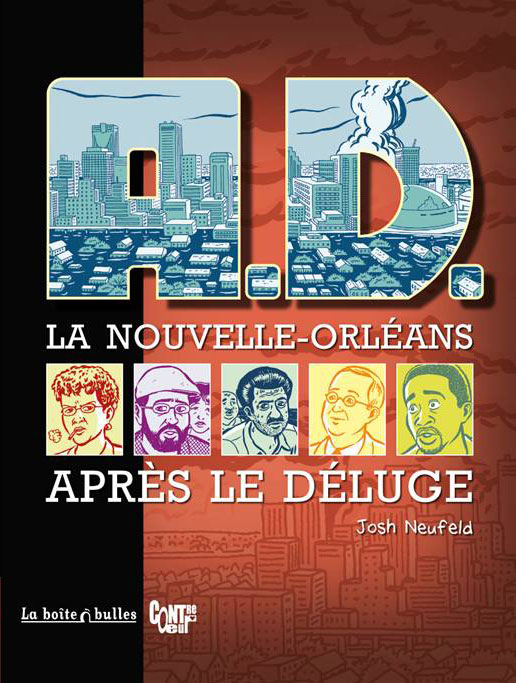 I spent the period January 19–31 in France, promoting the French translation of A.D—A.D.: la Nouvelle-Orléans après le Déluge (published by La Boîte à Bulles)—and attending my first Angoulême International Comics Festival. As you recall, I was in France just last summer, in Lyon as part of Les Subsistances’ Points de Vue festival, but I hadn’t been to Paris since the early 1990s. As a true-blue Francophile, I couldn’t have been more excited about the trip.

The most economical flight I found was a red-eye from Newark, so as I headed off to “Newark Liberty International Airport” via the seldom-used (by me) PATH train, I felt like I was traveling already. And somehow I ended up with my very own private “first-class” cabin on the Newark AirTrain. Woo-hoo!

As usual, I got very little sleep on the plane, despite having my own row to sack out on. Even with the extensive traveling I’ve been doing of late, I still get excited by plane travel (and the allure of free movies on the seat back in front of me).

Flying into Dusseldorf very early the next day, I made the connection to the short Paris flight. Arriving at Charles de Gaulle airport, I found my way to the RER B suburban train, which took me to my publisher’s home in the town of Antony, right outside of Paris. In fact, the train took me right through the heart of Paris, all the while being serenaded by live accordion music! I couldn’t help but smile at the cliché come to life

Weighed down by my old traveling backpack and my laptop bag, I made it to my publisher Vincent Henry’s place, meeting him and his two teenage girls before collapsing on the bed for a power nap. That was all I got, as I had an event scheduled for that night. With Vincent as my guide through the maze of the Parisian metro, it was off to the 17th arrondisement for an A.D. “dedication” at Librairie Apo(k)lyps. The store was remarkably similar to your typical American comics stores, with a healthy collection of American mainstream comics and “alternative” graphic novels to go with their selection of French BDs.

One thing I had been fretting about before my trip was knowing that French B.D. fans expect more than just a quick sketch in their books. I had heard stories about artists doing fully realized illustrations in each copy, some taking as long as a half hour to create. In my years of doing signings in the U.S., I’d never faced that sort of pressure! But I discovered that a head-and-shoulder shot of a customer-selected A.D. character did the trick. Add a little spot color with some pens I had brought with me, and voila! a nice memento in under ten minutes.

Fighting through my jetlag, I pulled off the signing pretty well. It wasn’t overly crowded, but there were a couple of people waiting when we got there, and I had a chance to talk with each buyer—in a combination of my bad French and their better English. And I loved chatting with the owner Laurent and the store manager Remi about comics in France & in the U.S. Then it was back to Antony with Vincent before my Saturday day trip to Metz.

I’ll get into that next time.