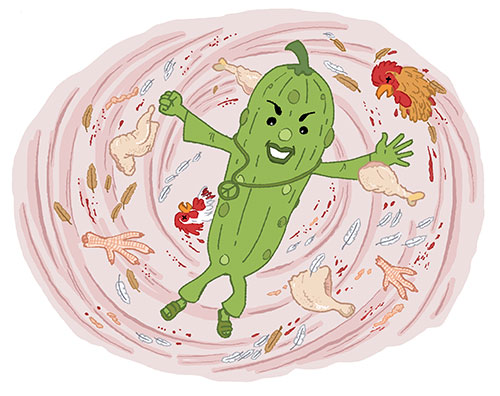 Announcing a new collaboration between my mother, Martha Rosler, and myself: “Food Riot? Food Riot!,” a comics story just published by e-flux journal.

The piece is an adapted excerpt from my mom’s mid-1970s manuscript, The Art of Cooking, which features a mock dialogue primarily between Julia Child and Craig Claiborne (with various interlopers.) We took the excerpt and adapted it into comics form—and I am confident in saying that this is a very different representation of Child and Claiborne than you’ve ever seen before!

Why now? Good question! Here’s an excerpt from my mom’s intro to the piece:

The [story] centers on access to food. Specifically, it takes on the people’s right to affordable high-quality food—and the repeated effort to either get fair prices, with government support, from producers and middlemen or otherwise obtain and distribute food by other means, such as by seizing and allocating it via actions often called food riots, which are a recurring form of people’s justice.

Josh Neufeld and I have worked on this comic off and on for about a year, and its topicality and resonance have varied as we did so. In the run-up to publication, when hoarding and price gouging scarred the coronavirus pandemic response, the comic, as already written, seemed to pitch itself in one direction. But as we are about to go to press, with the comic still unchanged, a different question of justice is at stake: people’s right to demand justice and equal treatment as well as equal access to social goods under the law in every aspect of life. No justice, no peace.

My mother and I have done some collaborative comics before, including one on gardening and Guantanamo Bay, and one on Jonas Salk. This is the longest one yet. E-flux journal (to quote their own description) “is a monthly art publication featuring essays and contributions by some of the most engaged artists and thinkers working today. ” They also happen to be the sponsor of the Martha Rosler Library traveling exhibition, which was (to quote Wikipedia) “a reading room in which over 7,500 volumes from her private collection were made available as a public resource in venues in and around art institutions, schools, and libraries.”