Two of my biggest heroes when I was a kid were Frederick Douglass and Harriet Tubman. I had posters of them on my wall! I read Douglass’s autobiography a number of times, and I thrilled to the daring exploits of Tubman and the Underground Railroad.

Many of the residents of Oberlin, Ohio, home of my alma mater, Oberlin College, were active in the Underground Railroad in the years before the Civil War. (Ohio borders Kentucky, which, during that period, was a slaveholding state.)

Recently, Oberlin Alumni Magazine commissioned me to illustrate an article about Oberlin’s role in anti-slavery activism. In reading the piece, by J. Brent Morris, and researching the era for my illustrations, I was fascinated to learn that many escaped slaves stayed openly in Oberlin—despite the fugitive slave laws—and became active abolitionists. Here’s a great quote from the article illustrating the fierceness of Oberlinians’ defiance of the “peculiar institution”:

Even though federal marshals and Southern slave catchers seemed a ubiquitous presence in Oberlin, it was nearly impossible to reclaim a free Oberlinite or “fugitive slave” from the town’s protective grasp. . . . Brooklyn abolitionist William Watkins could tell that Oberlin African Americans were “not afraid of the white man.” He noted “a sort of you-touch-me-if-you-dare” attitude about them and would not have been surprised by the security plans of a man like Gus Chambers, who declared that “If any one of those men darkens my door, he is a dead man.” In his blacksmith shop, Chambers always had a hammer and iron bar at the ready for protection, and most often also had a red-hot poker in the fire. Above his door was a loaded double-barrel shotgun, and beside his bed were razor-sharp knives and a pistol. He would never kill a man, he conceded, but clarified that a “man-stealer”
was not fully human. “The man who tries to take my life,” Chambers declared, “loses his own.”

A number of brave former slaves even journeyed back across state lines into Kentucky to recruit slaves to escape back north with them! In a four-panel comic I did for the piece, I show what one hapless U.S. Marshall based in Oberlin was confronted with when he tried to enforce the Fugitive Slave Law, from being run off with a shotgun to being beaten with a walking stick, to finally being run out of town by a group of Oberlin citizens. Ha!

I was given my choice of what to draw for a full-page illustration, and there were many amazing anecdotes of Oberlin’s place in abolitionism and the Underground Railroad. But the story I ultimately chose was a key moment in the Oberlin-Wellington Rescue. In 1858, an escaped slave named John Price was abducted by Southern slave catchers, who intended to bring him back to Kentucky. A large group of Oberlin residents, including many African-Americans, rushed to the nearby town of Wellington, where the slave catchers had holed up in a hotel for the night. In blatant defiance of the “law,” the Oberlin residents forced their way into the hotel and rescued Price.

My illustration shows the aftermath of the rescue, as the joyous crowd of rescuers carry Price out of the hotel on their shoulders. Photos from the era showed many of the Obies who took part, as well as the Wellington hotel itself, all of which I incorporated as best I could into the illustration. I even portray the slave catchers, cowering up in the attic, peeking out the windows as their “prize” is taken away.

It turned out that the Oberlin-Wellingto Rescue was a key moment in the lead-up to the Civil War. Ohio state officials defended the rescuers, despite their flouting federal law (the Fugitive Slave Law), and even tried to repeal the law at the 1859 Republican convention. (Remember, the Republicans were the “good guys” back then!) The resulting attention kept the issue of slavery very much in the public eye right up until secession and the shots fired at Fort Sumter.

Seeing as how it’s Black History Month, I’m proud to share this story, and my visual representation of the Oberlin-Wellington Rescue, which has rarely been portrayed.

(Thanks to Emily Crawford, the OAM art director, who was so accommodating to work with, and so supportive all along the way. I also want to draw attention to cartoonist Bentley Boyd‘s Oberlin: Origins and Onward!, a comic book history of Oberlin from 1833 to the present.) 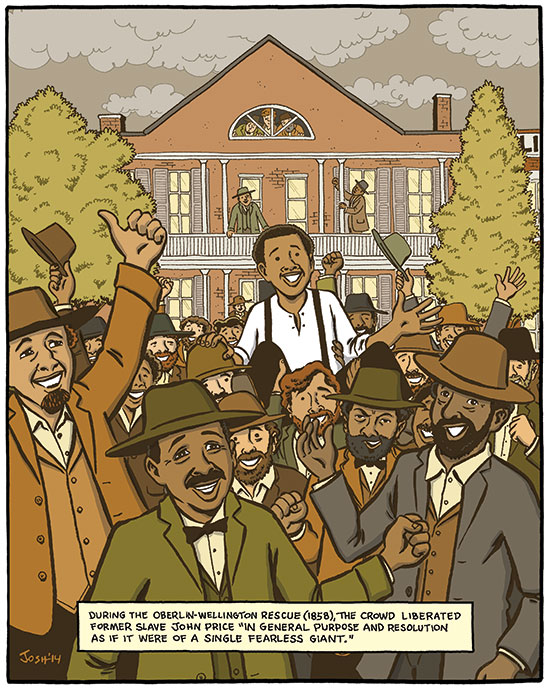