I’ll be attending my second-ever Angoulême International Comics Festival this week, ostensibly to promote La Machine à Influencer, the French translation of The Influencing Machine. (I’ll also be signing copies of A.D.: Le Nouvelle Orléans Après le Déluge, published back in 2011 by the good folks at La Boîte à Bulles. They’re the ones who brought me to Angoulême the last time, back in 2012, which I’ll be forever grateful for, as this festival is to me like making the pilgrimage to Mecca.)

The French translation (published by Ça et Là) is already the third one for the book, following Korean and Italian editions, with a German translation coming soon. (I already wrote about the evolution of the cover for the French edition in a previous post.) It’s ironic, because when we were working on the book, Brooke kept saying that she didn’t expect much interest from foreign-language publishers because it deals mostly with the unique trajectory of American media. Apparently, however, the book is more universal than even she imagined!

La Machine à Influencer has received a nice reception in France, with the distinguished newspaper Libération even doing a large spread about the book. Despite the fact that Brooke already visited France to promote the book (back in May), it gladdens my heart to be invited as well.

I want to say this without any bitterness whatsoever, but so much of the American reception of The Influencing Machine centered solely on Brooke, to the exclusion of my contributions as co-author. Yes, it’s Brooke’s manifesto, and I illustrated her ideas, but it wouldn’t be a comic book if I hadn’t drawn it. Ya know? In the U.S., the role of “illustrator” often seems to be dismissed, as if it were the work of a soulless machine. (Since I’ve collaborated with so many writers over the years, I can tell you this from long experience, and many of my comic artists cohorts would echo my feelings.) The fact is I sweated over the book for two years, working on it every step of the way from concept to scripts to finished product, and I felt as invested in communicating its “teachings” as anyone else—including Brooke. So, as I was saying, it’s gratifying that Ça et Là’s editor, Serge Ewencyzk, thought enough of my contributions to ask me to come represent La Machine à Influencer at Angoulême. Merci encore, Serge!

It probably doesn’t hurt that in the last few months the book has been blessed with a couple of journalism award nominations. The first one was from the Assises Internationales du Journalisme, a big three-day international congress on journalism which takes place in the northeastern city of Metz. La Machine à Influencer actually won the “Education to media” award, a special category created just for the book. There was a ceremony back in October in Metz, which Serge E. attended and accepted the award on our behalf.

The other prize the book was up for was the Prix France Info, an award for comics which contribute to journalistic understanding. It didn’t win that one, but still—not bad for our little collaboration!

P.S. One other thing: after Angoulême, I’ll be going up to Paris to do some more signings at some Parisian comics stores. One of them, Librairie les Super-Héroes, previously commissioned an exclusive bookplate for which I drew an image of Brooke as Spider-Man (riffing off a panel from the book, with her exclaiming, in French, Spidey’s famous phrase,“with great power comes great responsibility”). And here’s the image in question: 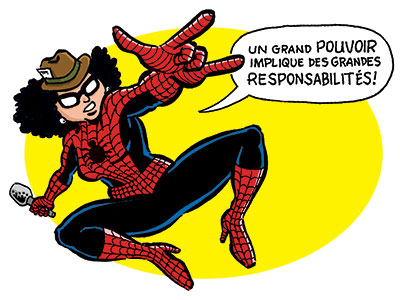