Crescent City Comics has just opened a second location, moving its flagship store to 3135 Calhoun Street, near Tulane University in New Orleans. (There’s a nice little article about the new store here, which features a time-lapse video of their logo being painted in giant scale on their ceiling.) That address, 3135 Calhoun, is the center of an A.D.: New Orleans After the Deluge vortex. Let me explain…

One of the main “characters” in A.D. is Leo McGovern, currently the manager of Crescent City Comics. This is what Leo looked like in the book:

(Leo once told me that his fondest desire was to be “one of those sweaty guys in a comic book.” Wish granted!)

But what’s so remarkable about Crescent City Comics’ new location is that 3135 Calhoun Street is the former location of the Calhoun Superette! For many years, the Calhoun Superette was owned by Hamid Mohammadi, another main “character” in A.D. (His name was Hamid in the original webcomic, then changed to “Abbas”—with a mustache added to his face—for the book. When I talked to him last year for a Hurricane Katrina 10-year anniversary comic, he allowed me to use his real name again.) Here’s how Hamid looked in A.D.:

Hamid and his wife opened the Calhoun Superette in 1996 and kept it open for 16 years, through thick and thin. A lot of scenes in A.D. take place at the store. (I wasn’t able to visit the store in person when I was doing my initial research and reporting, so Leo, as a comics fan knowing what kind of reference I would need, kindly offered to drive over to the store, introduce himself to Hamid, and take a ton of photos for me. That was back in 2007, the first time the two long-time New Orleanians met each other—brought together by A.D. “Of all the gin joints in all the towns in all the world…”)

Here are some scenes from A.D. of the store… from right before the storm:

To when part of the sign got blown off during the hurricane:

To the first hint of flooding: 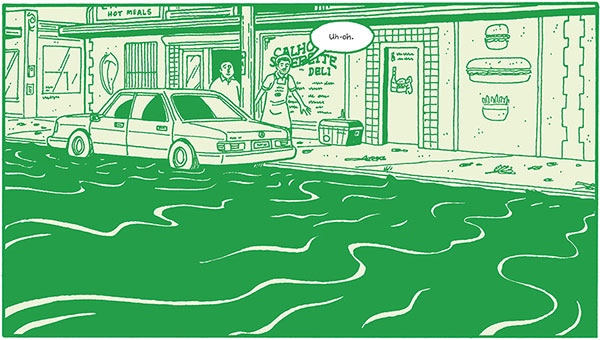 To when the water had gotten waist-deep:

To when the water was so deep the only thing to do was “abandon ship”: 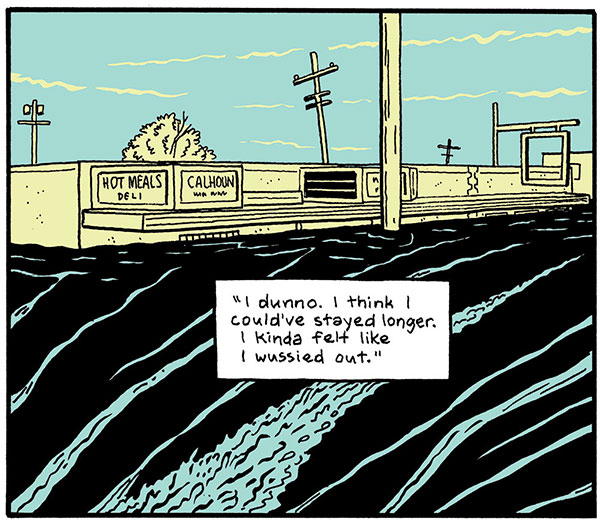 NOT wimpy! And here’s a scene from period of 16 months Hamid spent gutting the store and rebuilding it after Katrina: 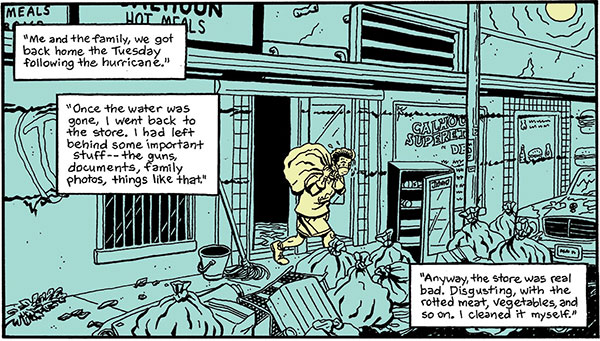 Hamid re-opened the store in 2007 (thank you, Google Street View):

But sadly Hamid was forced to close the Superette in the summer of 2012. Here’s what he had to say about it: 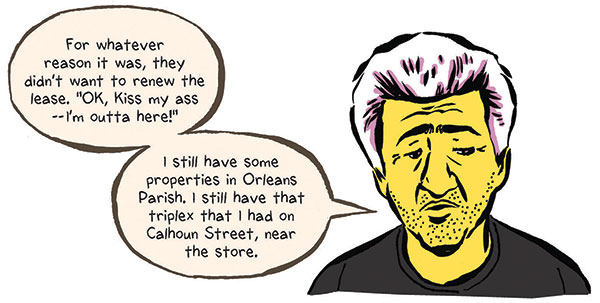 Forstall Art Supplies moved in to the space soon after (they used be located next door):

But Forstall closed in the summer of 2015, opening the door for Crescent City Comics—they kept Forstall’s potted plants:

After all the things Hamid went through, I was really bummed to hear that he had to close his deli. But I’m so glad its former location is back in the A.D. “family.”

Did I mention Crescent City Comics hosted a party for the paperback release of A.D. in 2010? That was a good time. They’re a great store. Go visit the next time you’re in NOLA, and pick up a copy of A.D. from one of the characters in the book… in the place where a lot of the book’s action happens!