Just out this week in Foreign Policy magazine is “The Road to Germany: $2400,” which depicts the odyssey of 11 Syrians from the doorstep of their unrecognizable homeland to a life in exile. The bulk of the piece is 11 pages of comics by yours truly, adapted from the reporting/writing of journalist Alia Malek. And as in The Photographer (by Emmanuel Guibert, paired with Didier Lefèvre’s photographs), “The Road to Germany” incorporates photos by Peter van Agtmael, who accompanied Alia on her immersive reporting journey. (Back in September, Alia and Peter shadowed the subjects of the story all the way from the Greek island of Kos to Frankfurt, Germany, meeting up with them at many points along the way.) In other words, this is a very unusual piece to be running in a mainstream news magazine!

In crafting the comics component, my job was to take Alia’s amazing, heartfelt reporting and create a narrative to fill in the visual gaps between Peter’s incredible photographs. I was handicapped, though. Unlike Alia and Peter, I hadn’t actually accompanied our protagonists—Muhanid & Ihsan; Mohammed & Sawsan, and their children Sedra, Ali, & Brahim; and Naela, Maysam, Suhair, & Yusef—on this odyssey, so I immersed myself as best I could. Sadly, in recent months, this type of journey has become all too common, so there were a lot of visual resources out there. And with the help of Alia’s notes and Peter’s archival shots, I dove into the minutiae of life vests, the UNHCR outpost in Gevgelija, and German border police uniforms.

I was also struck by the chart that Syrians and other refugees use as the main guide through their route. Even though everyone has smart phones and the resources of the Internet at hand, they still hold on to this crude schematic, which is more like a game board than a map: 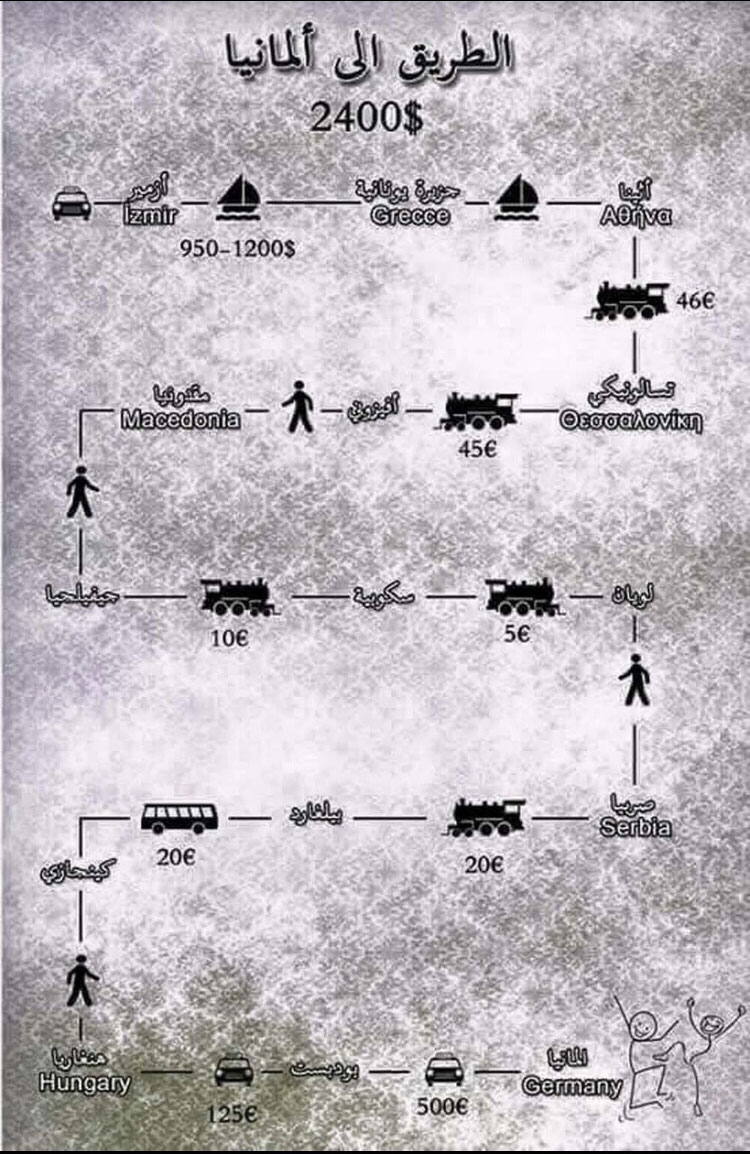 I wanted to integrate elements from the chart into the story, not only to remind readers of its importance to the refugees, but also as a bridging device for changing scenes and pushing the narrative forward.

For the comic’s opening scene on the overloaded raft, I was struck by Alia’s description:

Women and children . . . lined up, nearly supine, in the raft’s base. . . . Where any space remained on the bottom, another layer of women and children wedged in. Everyone’s bags were thrown in a heap on top of them while the men were pressed in along the edges.

FP Executive Editor Mindy Bricker and I quickly decided this image would be the “splash” panel of the comic, and I intuitively felt that the best way to capture it would be from directly overhead. This is from the pencils:

The comic starts with five pages of my hand-drawn art; the last six pages incorporate Peter’s photos into selected panels. Combined with actual quotes from Alia’s reporting, it’s pretty cool to see this marriage of documentary forms. And after a solid month of work back in December, it’s very gratifying to see this story in print.

I would say I’m speaking for Alia & Peter as well when I say I hope this piece succeeds in humanizing a refugee crisis which is all too often thought of in impersonal numbers—or sensationalized hysteria—and gives readers a feeling of “being there” on this harrowing journey. As the opener states, “Showing what happens when strangers are thrown together by adversity—how desperate alliances formed and dissolved—[‘The Road to Germany: $2400’] is a diary of an exodus from a war zone to a hopeful, if uncertain future in the West.”

For now, the piece is only available in print, in the Jan./Feb. issue of Foreign Policy. If it becomes viewable online I’ll be sure to post a link. (UPDATE: Here’s the link)