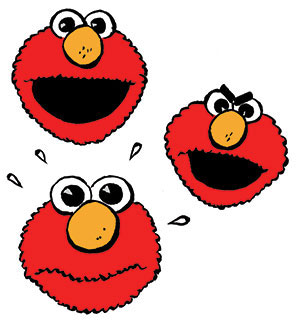 But when I did walk through the area a few years back I couldn’t help but notice a whole new group of inhabitants: Elmos, Minnie Mouses, Spider-Mans, and packs of others in Sesame Street and superhero costumes, posing for photos with tourists for tips. It was like they had come out of nowhere and had taken over the Square. (By the way: did you know that the area is actually not a square at all, but really more of a bow-tie shape?)

When I first began noticing the costumed characters it was really freaky and random to me, totally out of left field. And now, a few years later, it’s just another fact of life in NYC. Despite the shiny electronic billboards and chain restaurants, you still can’t walk through Times Square without being accosted. Maybe times hadn’t changed that much after all.

I don’t read the tabloids or watch the local TV news, so I didn’t know anything about all the hysteria surrounding these costumed characters—anti-Semitic “Evil Elmo,” the Spider-Man who punched a cop, the Cookie Monster who pushed a child, the occasional beefs between “performers” that erupted into blows, and so on. And the general complaints about the characters’ aggressiveness and panhandling techniques. 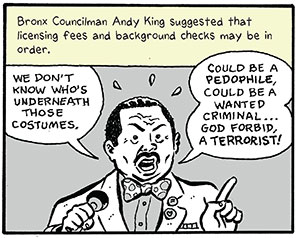 All this got a ton of local recent coverage, particularly in 2014. And believe it or not, the City Council held hearings on the matter—including the idea of requiring you to undergo a background check before you can put on a Spongebob costume—and instituted some new restrictions.

I was intrigued, so I spent a little time hanging around the area, and I couldn’t help put notice that most of the people underneath the costume were Latino. I wondered about them. Where do they come from? How much money do they make? What’s it like to do that job all day long? I decided I would find out–and show what I learned in a comics piece.

I spent two months doing research and interviews, and another couple of months writing the script and drawing the piece, which includes more than 50 panels of comics. (Much credit goes to The Nib editor Matt Bors for helping me winnow down the more than 70 panels I originally envisioned!)

The pull of the story, of course, is its sheer wackiness—plus, for those not from New York, this whole scenario is new information. And that’s how I suck you in. But then, halfway through the story, I go “behind the mask” to get the other perspective—that of the people in the costumes. And with all the new regulations spurred by the hyperbolic press coverage and local business associations like the Times Square Alliance, the real story comes into focus. 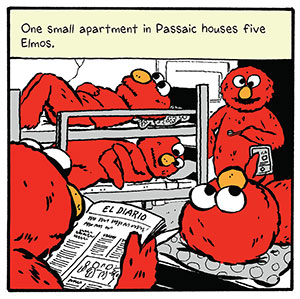 This story in particular is perfect for the comics treatment because of the costumed character aspect. It’s all be very meta, with the reader not being sure if he or she is looking at someone in a costume or just a drawing of the actual character from the cartoons or comics… (In that vein, I had fun with the color concept of the piece—let me know if it works for you.)

So debuting this week on The (new-and-improved) Nib is “Costumed Chaos in Times Square: The infamous street Elmos of NYC fight for their right to take selfies with tourists.” Check it out.