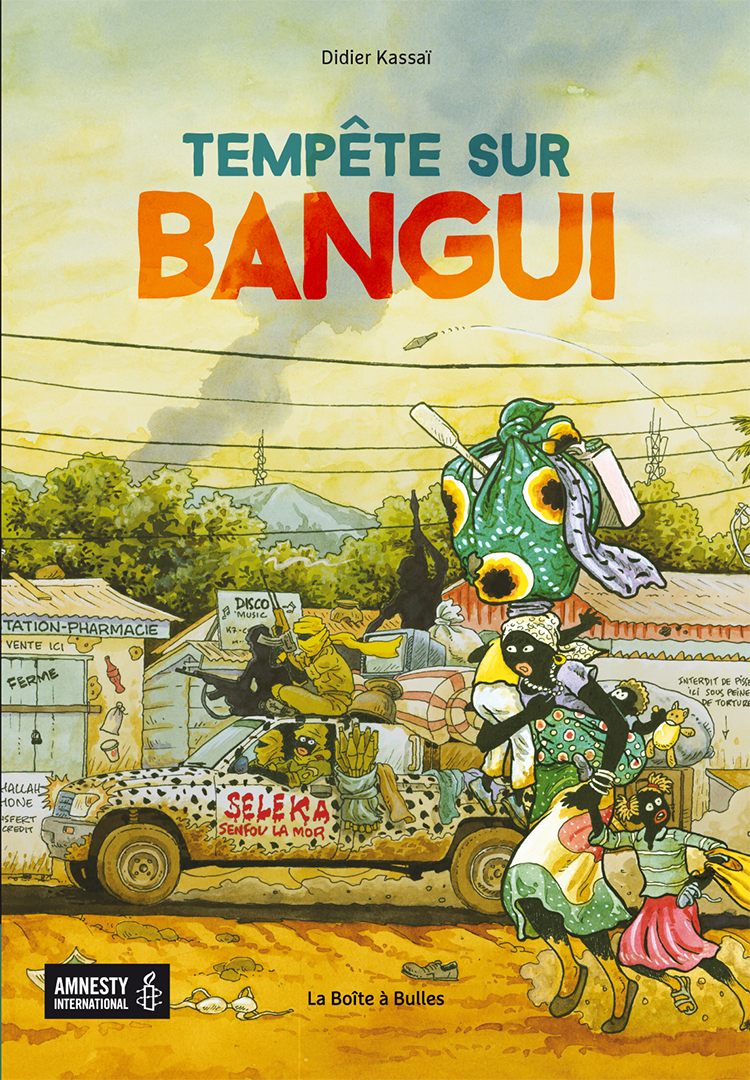 The French publisher of A.D. used my “JoshComix” font to letter Tempête sur Bangui, by Central African Republic cartoonist Didier Kassaï. The book is an autobiographical account of life in the CAR’s capital Bangui during the ongoing civil war. Published by La Boîte à Bulles with the cooperation of Amnesty International, Tempête sur Bangui is an assured work of cartooning, gorgeously tinted in watercolor.

American readers may well be put off by the… distinctive way Kassaï draws himself and his fellow Africans. It’s more than reminiscent of Sambo caricatures from the bad old days. But I have been repeatedly assured that Kassaï’s renditions of himself and his countrymen is not considered offensive back home. (I have to say it still troubles me…) Nonetheless, Kassaï is a major talent: if he lived in Europe or the U.S. he would be a big star.

This is the first time I’ve “licensed” my font to someone else, and I almost didn’t recognize my own lettering—Tempête sur Bangui  was lettered in all caps, whereas I almost exclusively letter upper-and-lowercase style (in the manner of Tintin, my reference-point for almost everything).

I am a huge proponent of hand-lettering, and the vast majority of my work has been physically lettered by me. (I particularly hate fonts that obviously look typeset or “computer-y,” because most of the time that kind lettering contrasts with the accompanying art and creates a real eyesore.) All the same, over the years I have found myself forced by time constraints to use a font to letter my work. The only thing that made any sense was to create a font based on my own lettering style, which is why I went to Fontifier some years back and did just that. And for only 9 bucks! And when A.D. came out in French, I adapted and made a new font that incorporated French diacritical marks. That’s the font they used to letter Tempête sur Bangui.

Tempête sur Bangui recently debuted at the Angoulême International Comics Festival and has been getting a lot of press in the francophone media. I’m proud to be associated with it, even in this minimal way.