Last fall, just when I was learning the ropes of the Knight-Wallace Fellowship, I received a contributor copy of Steve Heller’s Comics Sketchbooks: The Private Worlds of Today’s Most Creative Talents (Thames & Hudson).

When Heller first approached me about being in the book, I immediately felt my stomach clench. Like most cartoonists I’m pretty insecure about my art; most times, it’s bad enough to see my finished work in print—the idea of exposing my half-assed doodles and thumbnails felt really risky. But how could I turn down an invitation from design legend (and former New York Times chief art director) Steve Heller?

My first problem was that I don’t really have a sketchbook per se (e.g. as a thing I sketch in). I’ve kept my sketchbooks since high school—and thanks to my packrat mother, have artwork dating back to when I was four years old. (No matter how brave I am, I wasn’t about to show any of that!) But I really had to dig deep into old work to find anything suitable. For one thing, the purpose of my sketchbooks has radically changed as I’ve gotten older and as my career has progressed. In going through all the old books, I was amazed  how they reflect my evolution as an artist and as a cartoonist.

In high school, I kept a sketchbook to draw character ideas for various superheroes I created, or to do full-color “pin-ups” of some of my favorite Marvel or DC heroes. My friends and I at Music & Art High School would also trade our sketchbooks and draw in each other’s books, so they were ways of having samples of each other’s work for posterity. For awhile after I graduated from college, I kept a sketchbook at my day job at The Nation magazine, just to keep my skills fresh. That was the first time I really used a sketchbook for doodling and sketching, and as a record of the world around me: my girlfriend, co-workers, guest speakers, people on the subway, and the like. (I was also losing interest in superhero comics around that time, and was casting about for another way to express my artistic impulses.)

Then, in the early 1990s, when Sari and I embarked on a round-the-world backpacking trip, I took along the Eric Fischl/Jerry Saltz book Sketchbook with Voices (Van Der Marck Editions, 1986; now re-issued). The book is essentially filled with blank pages, but at the top of each page are instructions from  contemporary artists of that period; ideas which served as jumping-off points for various drawings. Oftentimes I would ignore the directives and just draw or paint whatever I felt like during my travels, but the ideas in the book are sharp and fresh, and often helped me when I needed a little prodding. That was also an important period where I did very little comics work, instead just sketching from life and painting watercolor landscapes and the like. The book helped me unlearn a lot of bad habits I had picked up during my youthful years as a wannabe superhero cartoonist. I kept Sketchbook with Voices all throughout my travels through Southeast Asia and Central Europe, and it’s filled with all sorts of memories—and even a few illustrations I’m not too embarrassed to look back at.

Nowadays, however, my “sketches” tend to be highly directed, either character studies or thumbnail layouts for scripts I’m working on—not so much sketches as preliminary drawing for finished comics.

The trip down memory lane was less painful than I feared, and I found a selection of things to submit for the book. I answered a few of Heller’s questions for the profile section, sent everything off, and then basically forgot about it. As I mentioned, the book arrived at my door just as I was immersing myself in my fellowship. Believe it or not, it wasn’t until the fellowship was over (last month) that I was finally able to check out the book.

One thing I really appreciated was Heller’s acknowledgment (in his introduction) of the inherent vulnerability evoked by the project, whose subtitle, “The Private Worlds,” etc. really rings true for me. (And I was relieved to see that a lot of the contributors admit that they too don’t spend a lot of time sketching for sketching’s sake.)

That said, the book features quite an impressive list of contributors, including masters like Crumb, Burns, Seth, and Mazzucchelli. It’s always instructive to see the sketchbooks of guys like that—like peeking into their brains and feeling a bit of the spark of their creative process. Another one of my long-time favorites, cartoonist Mark Alan Stamaty, gets really metaphysical about his sketchbooks, talking about how they’re attempts to explore what mystifies him in life, to get to deeper meanings, to discover new paths. And he quotes Matisse, who, when asked to explain one of his paintings, said, “If I could explain it, I wouldn’t have painted it.”

I loved looking at Peter Kuper‘s sketchbook work, much of it from his recent sojourn to Oaxaca, Mexico. Peter Kuper’s Comics Trips: A Journal of Travels Through Africa and Southeast Asia (NBM, 1992) was the only comic book I took with me on my round-the-world backpacking trip. Comics Trips is part comic, part sketchbook, and part photo album. It’s punctuated by beautiful watercolor sketches, ticket stubs and collages, and humorous photo essays like “Toilets of the World.” Comics Trips was a huge influence on my own travel work, and the main inspiration behind A Few Perfect Hours. So it was exciting to me to see more recent sketchbook work from Kuper—the images are energetic, filled with personality, and vibrating with color.

I loved reading British cartoonist Posy Simmonds comments, and looking at her sketches from one of my favorite recent graphic novels Gemma Bovary. Carol Tyler‘s work was a revelation. With cartoonist/friend Lauren Weinstein it was cool to see the various styles at work in her sketchbooks, from intricate inked landscapes to watercolor figure drawing. That’s another great function of a sketchbook: to play around with styles you don’t normally use in your professional work.

I really identified with what David Heatley says about struggling to retain the energy of his thumbnail sketches. There’s definitely a spontaneity, looseness, and economy to my sketches that I struggle to evoke in my more polished work. For this reason, my buddy & fellow cartoonist Dean Haspiel is always encouraging me to publish my sketches/layouts as completed comics—more on that later.

Upon returning to the States after our backpacking adventure, Sari and I ended up in Chicago, where I soon got hooked into the cartooning scene. I happened to get to know Chris Ware a little bit during that time, and he once gave me a very useful bit of sketchbook advice. His own sketchbooks were filled with hilarious one-pagers and strips which he did for fun—and as far I know, never published. Anyway, Chris recommended that I use my sketchbook to write and draw open-ended comics stories, to just go ahead with Panel One and see where it led me. I normally work in a very controlled way—full script, layouts, pencils, inks—so I followed his advice a little bit, and found it very useful in un-blocking my creative channels. Spontaneous sketchbook comics were a very good way of breaking habits and rethinking the comics-making process. 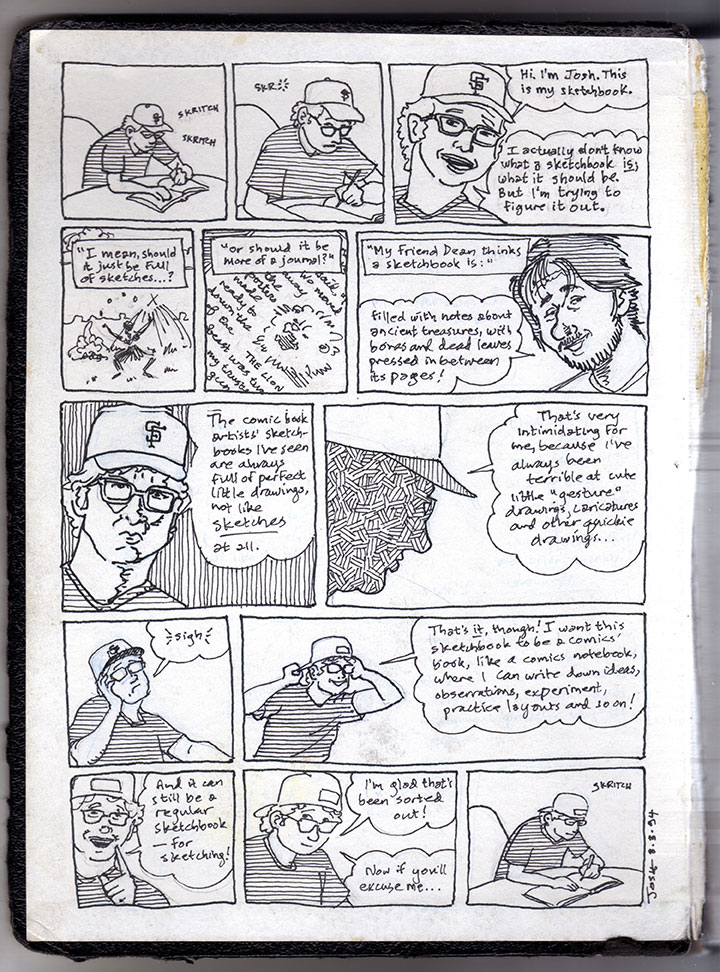 Still, old habits die hard—the only sketchbook comics I’ve ever published are the humorous travel tip “How to Squat;” and the one-page sketchbook comic that appears in Comics Sketchbooks. Created almost 20 years ago, in the piece I muse upon the very purpose of a sketchbook. So meta! Even though it’s quite an old piece, it still reflects my questions about the whole sketchbook practice, and I still find it an amusing little story.

The other pieces of mine used in the book were some character sketches and floor plan layouts from A.D., two pages of layouts from American Splendor, a pen & ink & watercolor Tintin cover pastiche called The Adventures of Josh & Sari, and a drawing I did of actors and assorted characters from the late lamented HBO show Bored to Death (which I drew when I was on-set).

P.S. Ironically, this past year I sketched more than I had in years. All during my fellowship I used my Moleskine notebook to sketch speakers who came in for seminars and presentations. I collected over 50 of those sketches in a booklet I printed up and gave to each of my fellow Fellows at the end of the year.

P.P.S. Regarding Steve Heller. He shows up as the art director from hell in Bob Fingerman’s Minimum Wage (originally published in the 1990s by Fantagraphics). I’ll never forget the scene where Fingerman’s sweaty stand-in, Rob Hoffman, an up-and-coming illustrator, visits Heller’s offices at the Times to show his portfolio. The Heller character whips through it like a flip book, never actually looking at the images, and sends Rob on his way. I read that scene right before I myself went in to show Heller my illustration portfolio. Talk about bad timing! However, he was kind enough to actually look at my work and gave me a few specific pointers before he rejected me. Well, I guess he didn’t technically reject me—he did give me the coveted contact list of all the art directors at the Times (the heads of the various sections), and eventually I did get a piece published in the paper’s Travel section. (It’s still up on my illustration website!) That was the last contact I had with Heller—I think he left the Times not oo long afterward—until he contacted me out of the blue to be part of this book. Clearly, in his mind at least I had grown as an artist in the intervening decade. Thanks, Steve!