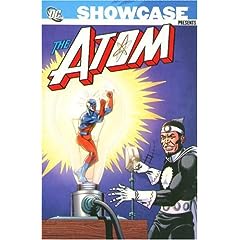 Ray’s then-girlfriend-later-wife Jean Loring is also a featured character (click to see in detail), though not via the melodramatic romance angle we’re familiar with from Superman and Lois Lane. Instead, many of the stories revolve around the Atom helping “lady lawyer” Jean defend falsely accused clients from criminal charges. Jean’s goal during is to make her mark as a lawyer before she acquiesces to Ray’s repeated (milksop) marriage proposals! Sort of a mixed message for feminists, that. (This early look at their romance and relationship gains added interest given what later happened to Ray and Jean in the 2004 Brad Meltzer-written classic Identity Crisis.)