Last night Sari & I went to see the IMAX 3D version of The Hobbit: The Desolation of Smaug, at the AMC Loews Lincoln Square on 66th Street and Broadway. We were witness to an incident there that will prevent us from ever patronizing that theatre again.

The film, whatever its merits, was an assault on the senses from the get-go, with the pitch-dark theatre periodically lit up by strobes of light and the volume turned up to “eleven.” It continued unabated for close to three hours. Well into the second hour, we noticed a commotion in the row in front of us: some poor guy was having a seizure. He was convulsing violently and obviously in great distress. The people in the seats around him were understandably agitated, some cringing from him and others seeing what they could do to help. One man in the row in front of him stuck something in the guy’s mouth, presumably to prevent him from biting his tongue. Someone called security. A woman in the audience—apparently a nurse or doctor—came down and began attending to him. Meanwhile the movie continued to play in all its raucous fury.

Finally a couple of theatre employees arrived, checking the guy out and talking on their headsets. By this time, the seizures had stopped, but the victim was slumped all the way over in his seat, barely conscious if at all. We were horrified to see that the movie was continuing; in fact, many people had turned back to the screen to watch the further adventures of Bilbo and the dwarves.

Sari and I approached the people in charge and asked why they couldn’t suspend the movie and put the lights up to properly attend to the victim. They replied that the EMTs were on their way, that “his airway was clear and he was stable.” (I didn’t know one of the criteria of managing a movie theatre was to be a qualified medical professional!) We reiterated our question as to why they couldn’t stop the film to take care of him, and the manager said that once you stop a 3D IMAX film you can’t start it again. (Does anyone know if this is true?) Needless to say, I was stunned by this response—she was implicitly acknowledging that the fear of having to refund 500 tickets was more pressing than the health of a human being in need.

By this time, we had learned that the victim was 24 years old and had a recent history of seizures, but had not yet been diagnosed with epilepsy or any other condition. You could argue that, knowing his history, he probably shouldn’t have gone to the film—particularly an immersive 3D IMAX presentation. But the fact of the matter is that he was there, and this was happening. And I couldn’t help but put myself in his place—confused, depleted, in pain, and being treated so worthlessly that they couldn’t bother to stop a frickin’ movie to attend to him.

A few minutes later the EMTs arrived, along with some cops. We followed them into the screening room as they attended to the victim. Again, the film continued, uninterrupted! The people in the row alongside the patient cleared out to allow the EMTs to examine him. The EMTs were forced to do this with flashlights, screaming into his ear to asses his condition. One EMT clenched a small flashlight in his teeth so he could use his hands to do an examination. Finally, four of them picked up the guy and awkwardly carried him out of the theatre—with the same EMT clenching the flashlight in his teeth as he helped carry the semi-conscious patient. It was a ridiculous and infuriating scene.

Fortunately, the guy essentially seemed to be okay. On their way out, I asked one of the cops what he thought of having to work like that, in the dark, with the film blaring away the whole time. He gave me a disgusted look, and said, “Not my call—ask management. The show must go on.”

There was no way Sari and I could return to watching the film. It’s one thing to suspend disbelief for a few hours. But when harsh reality bursts that bubble, there’s no retrieving it. At least not that night. 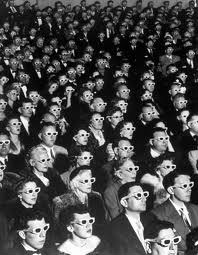 On our way out of the theatre, we found the manager again, to lodge a complaint about the company’s apparent lack of humanity. The manager said incidents like that “happen all the time,” and they had a protocol for dealing with it. We asked her if it was company policy to never suspend the film. She said it was her call. Again, she mentioned that once you stop an IMAX film, you can’t start it again—which I still find difficult to believe. In any case, her answer essentially confirmed that AMC is more afraid of having to refund a lot of tickets than the thought of one ticket-buyer dying in his seat. So what are the limits of this policy? Would an active heart-attack make them stop the show? How about a stabbing? Mind-boggling. (By the way, she offered us passes, which we turned down.)

I’ll never forget my last look back at the screening room we had been in: all eyes (wearing their 3D glasses) had turned back to the carnage on-screen, real life dispelled once again. It was exactly the same image as the cover of Guy DeBord‘s famous book Society of the Spectacle.

0 thoughts on “Society of the Spectacle: The Desolation of Smaug”