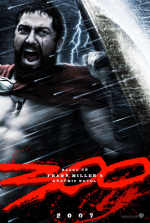 Frank Miller has invited me to a special IMAX screening of 300 tonight. I guess he didn’t read my review of Sin City! Nevertheless, I’m excited. I’ve never seen a feature on an IMAX screen before. And the after-party promises to be good. Like last time, I’m taking my friend Dani as my date, and we’re both hoping we don’t run into the “decrepit inker” again, though things seem to be looking up for him as I saw his work on a rather high-profile new DC title recently.

I’m a huge fan of historical fiction, particularly about the Hellenic Era, having grown up reading Mary Renault. So the subject matter of 300 — King Leonidas of Sparta’s last stand vs. Xerxes and the Persian Army — is right up my alley. I wasn’t particularly taken with Miller’s take on it in the original 300 comics, however, so my expectations for the movie are fairly low.

Which means I’ll probably enjoy myself!

Like a character from Sin City, I must be a glutton for punishment. I’ve already talked about how much I hated the movie, but I was recently forced to revisit its sordid world for an illustration assignment. A regular client — Washington D.C.’s City Paper — called up with a story about the owner of a strip joint and his run-in with an undercover cop. Words and threats were exchanged, along with a lot of male posturing; the whole scenario called out for the Sin City treatment.

I proposed the illo show the club owner and some strippers facing off the undercover officer and some other cops, in the Miller “style”, with some type treatment to drive the point home. When the a.d. mentioned that there was a D.C. goodwill campaign going on that promised “city living, d.c. style,” the whole concept came together.

END_OF_DOCUMENT_TOKEN_TO_BE_REPLACED

The less said about the Sin City advance screening the better. I enjoyed the first half-hour or so (most of the Marv storyline) purely on aesthetic levels — they really did bring the comic’s script and art to cinematic life — but by the end I felt like I had been bludgeoned and tortured. It reminded me why I stopped reading, and eventually got rid of, my Sin City comics (except for the original GN).

Going back to the original series, I find so much more to like than its filmic transmutation. The themes and content still leave me yawning, but the art is truly transcendent, unique to itself and much more sophisticated than memory alone represents it. Unfortunately, what started out as a fairly original homage to pulp novels became a pastiche of itself, Miller endlessly repeating himself and his sick themes of male angst. So boring! And what’s the deal with all the repeated castrations? The little Catholic schoolboy hitting his wee-wee ’cause he whacked off too much the night before? Yeeesh.

My mood was blue about the state of our culture as I left the theatre and it wasn’t helped when I found myself walking next to a fallen light from the fairly recent past. I don’t want to name him here for fear of embarrassment, but suffice it to say that he was a well-respected if not particularly virtuosic inker who worked with everybody from Miller to Byrne, Romita Jr. to Infantino, Marshall Rogers to Klaus Janson. Like I said, he was a loyal worker, dutifully putting in his stint in the assembly line that was mainstream comics.