When I saw this week’s cover of The New Yorker, “Still Life,” by cartoonist Chris Ware, I was immediately reminded of a comics piece I had drawn nearly 30 years ago. Chris’ cover is a multi-panel non-narrative portrait of New York City under coronavirus lockdown. My piece, from the fall of 1991, is a multi-panel non-narrative portrait of the U.S. in the aftermath of Operation Desert Storm (the first Gulf War).

The origins of my piece stem from a period when I was first starting to think about different ways I could use the comics form. Up to that point, pretty much all I had ever drawn were superhero-style comics, but I was losing interest in the genre and I was confused about what other possibilities there were for the form. So this piece, which is untitled, came out of that search.

The page mostly features familiar motifs of the first Gulf War era — camouflage, American flags, military helicopters — and some signs of the season — bare tree branches, fallen leaves. But it also has other more fanciful features. It’s like an impression of a certain time — in the life of the city, and in the psychology of a young man of that era.

One of the most striking similarities between the two pieces are images of New York City’s iconic skyscrapers in the page’s lower-left areas: Chris’s portrait of the illuminated Empire State Building at night, and my portrait of the towers of the World Trade Center, shrouded in fog. (If you are darkly sentimental, it’s easy to imagine those are the towers surrounded by the smoke of their own destruction on 9/11 — still some 10 years in the future.)

It just so happens that I know Chris Ware. We met in Chicago a few after I drew this piece, through a mutual friend, and our occasional get-togethers were very meaningful for me as an aspiring “alternative cartoonist.” Chris was always encouraging to me, and he taught me a lot about the practice of comics; and it was fun getting together with him and his wife Marnie.

Before you ask, he definitely never saw my non-narrative comic, and it has never been published — or until now, even publicly exhibited. I was just struck by the two piece’s superficial similarities.

(By the way, I colored the piece directly on the page with Design markers — probably the last time I ever used markers of any kind on my comics. Pre-PhotoShop!)

P.S. My very astute wife points out that Chris’s piece is very clearly NOT non-narrative (now that’s a confusing sentence). If you “read” it left-to-right, top-to-bottom, you realize that the story progresses through a day from morning to evening, and much of it is from the perspective of one person stuck in their apartment. There’s so much more to his piece than just an aspect-to-aspect series of images. Proof once again that Chris Ware is a genius!! 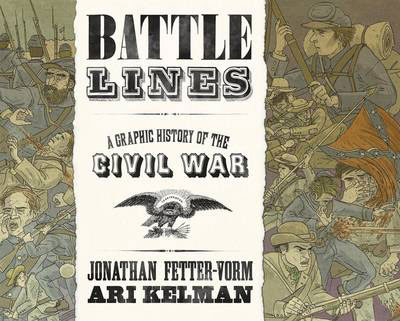 This coming Monday, May 11, I’ll be in Fort Greene at the wonderful Greenlight Bookstore, discussing Battle Lines: A Graphic History of the Civil War, by cartoonist Jonathan Fetter-Vorm and historian Ari Kelman.

I was given a chance to read an advance copy of the nonfiction graphic novel, and was profoundly impressed. Featuring Fetter-Vorm’s inspired storytelling, delicate line work, and haunting watercolor washes, Battle Lines is a tour-de-force of ground-level storytelling. Each chapter takes a single object and works ever outward, increasing in scope—through salient detail, it brings the epic conflict into focus. Profound and strangely beautiful, in my opinion Battle Lines is the best graphic novel ever produced about the Civil War.

The book came out this week (from Hill & Wang), and the authors will be presenting it to readers at Greenlight “on the big screen” on Monday. I will be there to admire the work and help guide the discussion. Please come by if you can make it; it’s really a special book. Here are the details: Debuting today on the Cartoon Movement website is a new piece of mine, “Bahrain: Lines in Ink, Lines in the Sand.” The story follows Mohammed and Sara, two young Bahraini editorial cartoonists who found themselves on opposite sides of Bahrain’s short-lived Pearl Revolution.

I met Mohammed and Sara at workshops I led while visiting the tiny Persian Gulf country on a U.S. State Department trip. Shortly after I became friends with both of them on Facebook, Bahrain underwent a great deal of turmoil in protests inspired by the Arab Spring — and also by the country’s simmering sectarian tensions.As the New York Times wrote the other day, Bahrain  is “… a country that was once one of the region’s most cosmopolitan is now one of its most divided.”

In the story I document Mohammed and Sara’s impressions of the events, through their words and experiences — as well as their own cartoons, which were published as things unfolded.

As I mentioned, I visited Bahrain last year as part of a trip that also took me to Egypt, Algeria, and Israel/Palestine. I later realized that the way I was “handled” by the State Dept. folks in Bahrain was very different than in the other countries I went to. Essentially, I feel, things were whitewashed a bit, and I was not given a full sense of Bahraini society, particularly the ethnic tensions between Sunnis and Shiites. You can read my original blog posts about the trip, my first reactions to the Pearl Revolution, and my realization that I had been “duped” here. Also, Michael Cavna of the Washington Post‘s “Comic Riffs” blog wrote a very nice profile of me and the piece here.

Since I finished the piece, the Bassiouni committee, which I mention near the end of the story, has published its report. You can read the original report here [a pdf], or two very thorough New York Times articles about its reception here and here.

In the end, I find the whole story quite heartbreaking — particularly because of the way the demonstrators were so brutally suppressed. It’s also really sad to see the lack of perspective on both sides. There’s a quote from one of the Bassiouni committee investigators that I think sums it all up quite tragically: “‘There is no neutral account ‘ said Mohamed Helal, the commission’s legal officer…. ‘The community is almost living in parallel universes.’ In investigating one episode, Mr. Helal said he found on the same day, at the same moment, ‘there was not one moment of overlap. How can you reconstruct the truth when there’s no overlap?’ he asked.”

Once again, here’s a link to the story, “Bahrain: Lines in Ink, Lines in the Sand”: http://www.cartoonmovement.com/comic/24

Did you see this piece in last Wednesday’s NY Times? It’s about a new graphic novel about the Holocaust being used as a teaching tool in German schools. What really struck me about the samples of the comic they show is how the art apes Hergé and Tintin. Outside of R. Sikoryak, this may be the best “Hergé” I’ve ever seen. Typical for a mainstream newspaper piece on comics, it took some searching to spot attributions for the book, which it turns out is drawn by a Dutch artist named Eric Heuvel (and written by Ruud van der Rol and Lies Schippers). Looks like the book is a co-production of the Anne Frank Center and will be published in English this month or next. And it also looks like the same team of authors did a previous Hergé-style Holocaust book. I must have them! As a huge Tintin fan and a WWII buff, it’s almost like these books were made just for me. I’m shocked I never heard of them before.

Recently I’ve been watching a lot of World War II movies. My local library has a bunch of classics on DVD and I’ve been picking up just about everything they’ve got. I started with black-and-white films like The Best Years of Our Lives and From Here to Eternity, and moved on to Twelve O’Clock High, Stalag 17, and a couple of John Wayne flicks, The Sands of Iwo Jima and They Were Expendable. I augmented those with movies of more recent vintage: Saving Private Ryan, Schindler’s List, The Sand Pebbles, The Big Red One, A Bridge Too Far, Windtalkers, Pearl Harbor, Enemy at the Gates, Charlotte Gray, The Great Raid. Those viewings are just in the last few months. Over the years I’ve probably seen 75 or more WW II movies, including many of the ones above previously. A few are great, many are good, many are dreck — the point is I’m obsessed.

I grew up in the 70s and 80s fixated on the Vietnam War and Vietnam-era movies. Beginning with (of all things) Magnum P.I. (remember he was a Vietnam vet?) and First Blood (embarrassing!), and moving on to staples like Apocalypse Now, The Deer Hunter, Platoon, and Full Metal Jacket. As the years passed, I gobbled up more and more: Born on the Fourth of July, Coming Home, Big Wednesday, Good Morning Vietnam, Air America, The Boys in Company C, In Country, Hamburger Hill, Hearts and Minds, 84 Charlie MoPic, Casualties of War, Jacob’s Ladder, Tigerland, even apologist crap like The Green Berets. I gloried in the moral ambiguity of those films.

END_OF_DOCUMENT_TOKEN_TO_BE_REPLACED

I’ve put up the four strips I’ve done so far for FSB (see below), as well as a one-pager I did about the war in Iraq. Check out the Samples section to read the new pieces.